Students | Staff | Alumni | Media
Font Size: A A A

Benevolence Lights up my Later Life

Home > Nursing & Health Education Research Centre > Projects > Benevolence Lights up my Later Life
"Benevolence Lights up My Later Life&rdquo; is a systematic educational programme designed to deal with an ageing society. Since May 2011, the Programme has been phased in on five themes. They include: (1) the prevention and caring for dementia, (2) the handling of chronic diseases and hospice care, (3) healthy ageing and cross-generational bonding, (4) the spiritual need of the elderly and (5) the caring for the elderly in the community and nursery home. As part of the development of KWNC, the Programme began with &lsquo;the prevention and caring for dementia&rsquo; advocating gerontogical care and love that is universal to humanity but especially valued in the Chinese culture, which is best illustrated by the Chinese saying, &lsquo;extending the care for our senior family member to other elderly.&rsquo; It is our aim to make them live a dignified and hopeful life. The Programme promotes and puts into practice the idea of &ldquo;ageing at home&rdquo; as well as improves the quality of life of Macao citizens, which was advocated by the Macao Government. &ldquo;Benevolence Lights up My Later Life&rdquo; provides general and professional education of gerontology, including knowledge, skills, and values, to caregivers, medical personnel in gerontology, and professionals in the social welfare sector. At the same time, through international exchanges and cooperation, the Programme aims to nurture outstanding scholars in gerontology.
Rooted in the socio-cultural background of Macao and in line with the objectives of KWNC, the Programme is a comprehensive system and works with a multidisciplinary approach. It highlights the concept of positive ageing while evidence-based study is an essential part of its educational design and practice. The Programme is academically supported by the Nethersole School of Nursing, the Chinese University of Hong Kong, the Hong Kong Alzheimer's Disease Association (HKADA), and others. Further, the Programme is integrated with the teaching, curriculum and research of KWNC, so that the human resources and evidence support can be guaranteed.
Moreover, to get the Programme into full operation, KWNC partners up with community organizations such as General Union of Neighbourhood Associations of Macao, Macao Federation of Trade Unions, Caritas Macau, Macau Alzheimer's Disease Association (MADA), etc. and facilitates in the annual activities of different organizations. The prevention of dementia championed by &ldquo;Benevolence Lights up My Later Life&rdquo; has been listed as one of the priorities in the Policy Address of the Macao SAR Government for four consecutive years. The Programme is also sponsored by the Social Welfare Bureau and the Health Bureau of Macao. It has the following four sub-programmes: 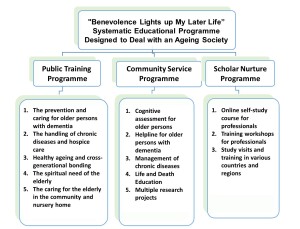